Hello peeps! Just a little post today on a little project I have just finished. It’s a dice box! This little thing was inspired by the box itself. I found a card game while I was sorting through stuff and it was in a rather nice tin box with a spring mechanism on the lid. Very cool I thought! Shit game I thought! Perfect box for dice it is! 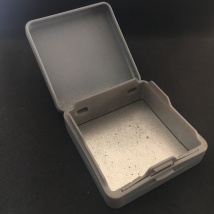 The insert was designed in CAD and then 3D printed in grey PLA. The whole lot was then primed a few times in grey primer. I made sure the dice fit nicely into it and are loose enough with plenty of space around them so you can get them out easily. So far so good!

THEN THINGS GOT GRIM!!!

I decided to have a go at some weathering techniques using masking fluid and scratching and above is the outcome. A Grim Mech Dice Box! Quite a fun little project and it’s spawned yet another project to add to the list. A Mechanicum based Kill team. More on that to come!