While most of the ghosts that float around in the depths of The Chapel are hell bent on depriving the living of life The Book Ghoul is only really interested in knowledge.

He can be found in the many libraries of The Chapel scribbling notes with his bone pen and his skull pot of ectoplasmic ink, while muttering to himself on how stupid everyone else is. You see this is his problem, he’s not violent but extremely condescending, patronising and overly insulting to all those he speaks to. So much so that many have walked away doubting their very existence and purpose in life.

If you can suffer him though the knowledge he can bestow is pricless. This leads to his next problem, the fact that he’s so damn hard to find! Because he thinks everyone is stupid and are better off killing theselves, he only likes the company of books and scrolls and information devices. He devours information, sucking it into him like a leech with blood and writing interesting parts down to add to his personal collection. It’s this collection of knowledge that those who have heard of him and seek him out want for it is said to contain the darkest of secrets of the early days of The Chapel from sources that have long since disappeared. This also raises the question of who he once was and how old he really is. 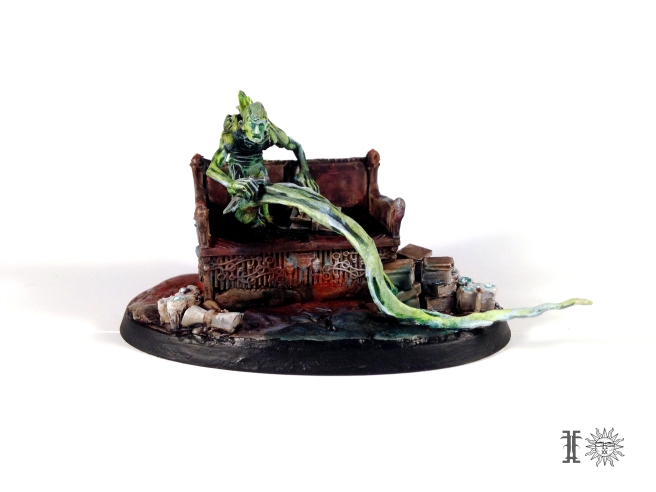 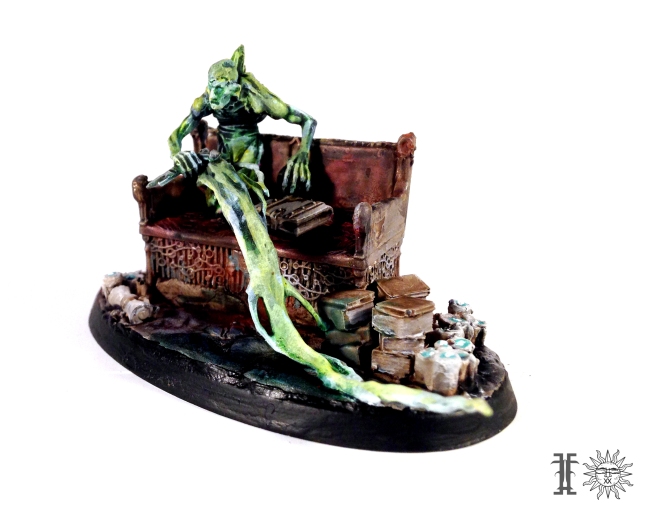 ” That acid tongued wretch! How dare he tell me I’m no smarter than a rusted, squashed skull crab!!”

He later died by having a large part of a statue fall on him,which was shaped like a skull.

It’s been a while since I posted and like most people it’s all lifes fault and ghost 4 had been sitting on my bench for a while and so I thought I’d better finish him before my Ostium Guide. I hope you like him.

There is a lot to do still and there is more to come, mysteries about The Chapel to tell and models that you have all greatly inspired me to make. The Chapel is constantly calling and something ancient and evil will soon rise.

13 thoughts on “The Book Ghoul”